This is a story from the heart of the dotcom boom.

As a consultant, I designed and built an application that was delivered 'in the box' for the first Palm VII, in 1999. So I was one of the first people running around Silicon Valley poking away at a mobile touchscreen and waiting for data from the web. Everyone does this today on smart phones, but in 1998 there were maybe a dozen of us. Nobody knew what I was doing, and everyone wanted to know.

This led me to start a company, Workspot, partly to produce the first apps.

A friend was working at eBay, and just months after their IPO, he managed to get me an appointment to see the executive staff. They believed they were helping to sell the Web, as well as PC's, by giving people something compelling to do. And they believed they might be able to help build the market of web-enabled mobile devices in the same way. I believed the same thing, and had prepared a demo: just a few pages with listings from eBay, and a way to bid. From a Palm VII. In their office. They said that AT & T had tried to do the same thing, and their demo failed. So, from 1999 to 2003, I had a contract to produce applications for Palm's series of web-enabled devices, including the TREO, which was probably the first viable smartphone.

Here are the marketing pages I produced for eBay, from the Palm VII version.

But aside from the normal small-form-factor design issues, the incremental development of applications on changing devices with changing interfaces, and the increasing demand for effective scale on the server-side, there was one very interesting moment, very particular to the first dotcom boom.

The Free Software movement had made the World Wide Web possible, in so many ways. But Silicon Valley, despite its endless claims of revolution, is a mind-numbingly conservative place, with an awful corporate mindset, much like hollywood. Some influential industry columnist at the primary Silicon Valley newspaper, the San Jose Mercury News, had written a scathing account of GNU/Linux, saying that, despite all the startups making use of it (including our colleagues at Google, just to give this some perspective), GNU/Linux was not ready for the Big Time.

And I remember -- I was reading this in a server room where we were installing a bunch of GNU/Linux servers for the eBay mobile service -- he said something like "IT people in the know use only Unix BSD or Solaris. Until eBay uses Linux, it will just be for hobbyists. And don't hold your breath waiting for that."

I've never had someone so directly inspire me to do a publicity stunt. It was as if a straight-man had set me up for the punchline. The only question was how to do it.

Since we used the Debian GNU/Linux distribution, and that was the least commercial distro available, it seemed best to be subtle, and allow Debian to wake up to the news that eBay was indeed using GNU/Linux. Curt created a quick sketch of what we did, to help rub it in. The news burst forth with such geeky told-you-so enthusiasm that it rippled across Silicon Valley like an explosion.

Eventually, people discovered the other projects we were working on ... but that's another story. 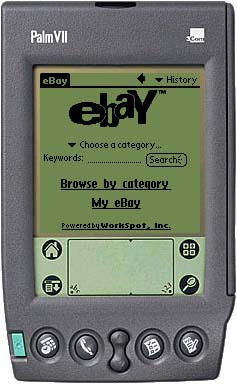 A screenshot of Palm's mobile development emulator for the Palm VII. Commonplace today, this was really the first time a desktop's network connection was used as a working substitute for an over-the-air network connection.